The beauty of smoking marijuana is how personalized the experience can get. Over the last couple of decades, run-of-the-mill hand pipes have evolved into works of art. From the advent of water pipes to present-day favorites glass bubblers and glass bongs, customizing your smoking experience has never been easier.

It’s figuring out if you’re a bubbler or bong person that’s difficult. Whose side are you on in the bubbler vs bong debate?

Let’s discuss scenarios where bongs or bubblers tend to work best, what makes them similar, and the pros and cons of both!

What Are Glass Bongs?

Bongs have become a popular staple throughout the smoking community because they allow you to take significant hits of cool smoke. As you light the weed in your bowl, the hot smoke travels through the downstem and into a water chamber. Here, the smoke automatically cools down.

Cooled smoke travels up the long neck of the glass bong until it reaches the mouthpiece. Here, the flavorful smoke touches your lips, allowing you to produce large clouds of loud.

The size, amount of smoke, and the cooling effects of bongs are some of the biggest differences in the bubbler vs bong debate. We’ll get to those in a bit. First, let’s talk some more about glass bubblers.

What Are Glass Bubblers?

Bubblers tend to look more like glass pipes than bongs. That’s due to their smaller size. They also have many of the same functions as other hand pipes. You put the weed into a bowl, light it, and smoke out of the mouthpiece. In some instances, bubblers also have a carb hole.

What separates a bubbler from a regular glass pipe is that you can fill some water under the bowl. The smoke will trickle along the downstem and into the basin. Then, it will travel up the neck, ending at the mouthpiece.

For some bubblers, that’s the most cooling action your hit is going to get. Other glass bubblers are designed with a whirling smoke chamber. More twists and turns your smoke goes through allows for added filtration!

When to Use a Bubbler vs Bong?

You wouldn’t use a butter knife to carve a rare steak. Sometimes different jobs call for different tools. Smoking herbs is no exception.

Using a Bubbler vs Bong

You’d use a bubbler vs bong when you’re on-the-go. Sure, bongs come in different sizes and from many popular bong brands. However, not many are as small as your favorite hand pipes for weed. Bubblers tend to bridge the gap for those who are comfortable smoking bowls but want the benefits of filtration that comes with a bong.

You’d most likely bring a bubbler along for a day trip. It’s easy to pack and allows you to take quick, clean hits on-the-go. Its small stature makes hiding a bubbler much easier. That’s why many younger smokers tend to lean towards glass bubblers vs bongs.

Using a Bong vs Bubbler

Glass bongs are perfect for the daily smoker. They’re ideal for a wake-and-bake rip that will kickstart your day. However, they’re also perfect for people sitting around their home chilling with their friends.

You’d also want to break out the glass bongs during a party. The bowls tend to be a little bigger in bongs than in bubblers – 14mm is the standard size. So, you’ll have to pack less. Plus, the hits are larger. Therefore, the chances of a glass bong making its way around the circle multiple times are much smaller.

Similarities Between Bubblers and Bongs

While operating a bubbler vs bong is a completely different experience, there’s more in common between these two parties than meets the eye. For one, they offer cleaner and cooler hits than the most popular ways of smoking — joints and hand pipes.

In terms of functionality, there’s not much difference between a bubbler vs bong. They’re both water pipes with a similar anatomy. Each mechanism contains a water chamber that acts as a filtration system to diffuse harsh and hot smoke. Both result in cool, delicious smoke that novices and pros will love. However, that’s where the similarities between glass bongs and bubblers end.

Bubbler vs Bong: Pros and Cons of Each

Different occasions call for different smoking tools. Plus, we all have our own taste preferences. So, a quality that’s popular for most glass bubbler users might cause little reason for excitement to you. Just as design is a matter of preference, so is choosing between a bubbler vs bong. Here are some pros and cons of both to help you decide.

Pros and Cons of a Glass Bubblers 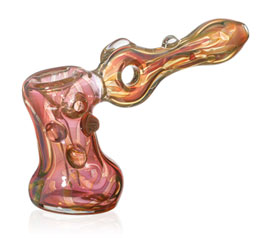 Glass bubblers are easily portable. Since they’re more compact than bongs, you are less likely to break a bubbler. Many glass bubblers are equipped with filtration systems due to the downstem in the water. Depending on the design of your smoking chamber, you might get more filtration action, especially if the neck resembles a Sherlock pipe on a water slide!

With that said, glass bubblers are harder to clean. The length of bongs allows you to change water with ease and clean out any resin that can influence how big of a hit you get.

Also, compact-sized glass bubblers don’t allow space for different percolators that provide extra filtration. You still get percs with two or three holes that make for simple and effective diffusion. However, the lack of customization might make you choose bongs in the bubbler vs bong battle.

Pros and Cons of Glass Bongs

Glass bongs are an investment for smokers, so it’s important to make sure you have a good bong. The price is higher, depending on the bong type, but you get so many benefits that make this investment worthwhile. That’s why many people who use bubblers tend to look at a bong purchase as a graduation. 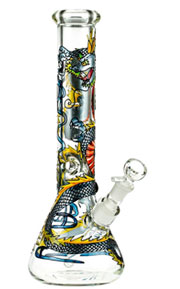 These bigger smoking accessories allow for larger clouds of smoke that are sure to get you (and your guests) nice and blazed. Bongs easier to pass along in a group than a bubbler. However, that also makes them more prone to damage than their smaller counterparts.

Glass bongs are also far more customizable. There are wide varieties of percolators, downstems, joints, and bowls that you can mix and match with your piece. While it’s fun making your glass bong unique to your preferences, it can be a costly hobby.

Check out these cute girly bongs if you’re looking for something fun to add to your collection!

Cleaning glass bongs are way easier than bubblers. Its wide base allows you to get in deep without missing any nooks and crannies. Also, bong tubes are far more spacious than bubblers. There’s not as much room for resins to pile up, making the need to clean less frequent.

Bubbler vs Bong: Which One?

Picking between bubbler vs bong is a personal choice. If you’re a new smoker or on a budget, you might want to go with the bubbler. It’s an excellent introduction to the bong world.

For those who have smoked weed regularly with glass pipes and joints and are looking for a change, you might be ready for a glass bong. If you have a high smoking tolerance and enjoy big rips to power you through your day, bongs are the right choice for you.

At the end of the day, you can’t go wrong with either. Both glass bongs and bubblers lend themselves to occasions you will undoubtedly be in. There’s nothing wrong with being prepared with the right glass piece for that particular situation!