Some of us get extreme cases of butterfingers after we toke up. If this is you, then it may be wise to get a bong better suited to your needs instead of constantly picking up the pieces of your expensive glass ones.

Luckily, modern wonders have created a more robust solution – silicone bongs. Here are a few of the very best you can buy right now.

Intricately designed without compromising reliability. The removable down stem is easily replaceable. 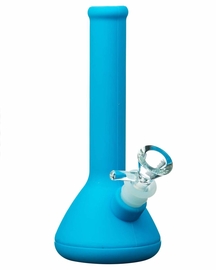 Might not be a looker but it’ll get the job done. This is a good ol’ quality basic silicone bong that won’t burn a hole in your pocket.

While these standouts are great in their own right, there are plenty more to choose from. Hybrids, for example, are pretty neat in giving you the best of both worlds. Glow in the dark ones are pretty cool too.

One of the main reasons to go silicone is that they travel well. The problem with some designs is that even if you can have them squished inside your bags, they still take up a lot of real estate inside your knapsack.

solves this probably with its collapsible feature. So, this can easily go alongside your collapsible water bottle and bowls when you go hiking in the woods. Now, there’s really no reason not to have a good smooth even when you’re traveling.

It’s made of a single piece of silicone so you won’t have to worry about air gaps and leaks.

’ entry is probably the most basic type of bong in this list but, this doesn’t mean it’s the worst. In fact, it’s one of the most efficient in this list.

The silicone used in this bong is top-notch. It’s got a melting point of 1200˚F so you’re probably not going to be able to destroy it even if you tried.

If you’re feeling adventurous, maybe a themed silicone bong would do you good. This military machine gun-themed bong called aptly “The Machine Gun” is not only quirky, but it’s also as reliable as a real machine gun because of its removable silicone downstem.

It’s also surprisingly built well despite its aesthetic liberty, all while still coming in at under $100. Even if there may be some air gaps, in some areas, they’re relatively tiny. So, you’re assured a great bong rip every time.

The experience is pretty poetic as when you go in for the hit, you actually look like you’re getting toked on the barrel of a freshly fired weapon.

If you plan on getting toked while re-watching the Trailer Park Boys, you better do it with this Silibong. It’s got a huge TPB decal on the side ensuring people know that you’re a true fan of the show.

And if you’re the type to get too engrossed in the show to care for where you put your bong down after a smooth hit, the suction feature at the bottom of the bong is going to save you and your precious Kimbo Kush from your clumsiness.

Speaking of smooth hits, you can make them even smoother by installing the included ice catcher. 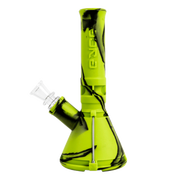 If you just want a personal bong that you can take anywhere with you, the EYCE Mini Beaker must already be on your wish list. It’s a well-reviewed, 7.25-inch-tall bong that’s just small enough to keep in your everyday backpack.

So for those in-between moments, like say, before you leave the office, you can whip this out of your bag and let rip a quick one. You can also just use it as a backup bong so you’re never just a zipper away from a smooth ice-cooled hit.

There’s also a built-in poker that can prove to be real life-saver in dire situations.

If you identify as a weed connoisseur and like to travel, the Silicone Hybrid Bong might tickle your fancy. This gives you the best of both worlds.

The crowning glory of this thing is the glass tree perc. It’s definitely a huge advantage because it ensures an ultra-smooth hit. And, since it’s removable, you can keep it one piece safe at home while you bring around the silicone mouthpiece and bottom.

The two silicone pieces fit snugly enough together to minimize the airgaps so you’ll still enjoy a full hit as long as you don’t hold it too tightly in the neck.

This beaker-shaped bong is best for efficiency and it shows in the price too. Since it doesn’t have those nice-to-have features, it’s easier for Nucleus to charge only for the necessary aspects of the bong.

Beaker-shaped bongs are just plainly perfect. The base is wide enough to not fall victim to slight accidental nudges, the mouthpiece is petite enough for most people, and it’s just so darn efficient. There’s literally nothing wasteful about the whole design

That’s why this Silicone Beaker Bong, is such a big hit. It’s just a little bigger than the one earlier from Nucleus so it also doesn’t add much to the clutter. The only difference is that this 9-inch bong is big enough to pass around.

For extra longs sessions, you may want to try this Roll-Uh-Bowl bong. It’s got a spring-loaded bowl that can easily eject spent weed. It’s a nifty feature that you might never have known you needed until you’ve used one of these.

If you like taking a hit while you’re on the move, this particular feature can be a life-saver. Imagine having to scrape out your bowl while you’re kayaking in the middle of the lake. It’s just impossible with traditional bowls.

There are very few bongs that can boast having a perc. This PieceMaker Kali Beaker Base Silicone Bong is just one of the few.

Unlike others that need the perc to be made from breakable materials, the trademarked Hex-TEK high perc that they have on this is made of silicone as well. Therefore, you can have an extra smooth hit anywhere you want without having to pack a breakable perc.

More than anything, people look for versatility in their silicone bongs so I would have to crown the PieceMaker Kali.

It’s got the perfect size that you can either take with you on a camping trip or just keep on your desk, a quirky glow in the dark feature, and most of all, it’s got that Hex-TEK perc that’s just out of everyone else’s reach.

However, the Skinny Neck Silicone Beaker Bong comes at a close second because it’s just so darn cute and versatile. The best part of it is that it punches way above its weight class in terms of the price range.